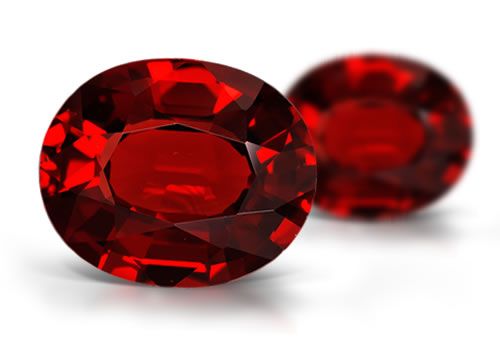 The garnet is arguably the most fiery of birthstones! With its most common deep rep hue and hard composite, the January birthstone is a force to be reckoned with indeed. We want to go into some interesting facts about this unique gemstone and where it comes from.

Why is it called a “garnet”?

When discussing the garnet as a birthstone, it’s mostly the red garnet. The word garnet signifies “seed” taking after a pomegranate seed, as a result of its dark red tones. The red garnet is found it places like Africa, Sri Lanka, and India. The garnet is a valuable stone that holds numerous characteristics of quality, persistence, success, and wellbeing. It is also believed that the garnet can shield a person from nightmares or accidents away from home. Who knew the January birthstone could be so fascinating?

Did you know that the garnet actually comes in many different colors?

The garnet comes in many hues: tans, red, pink, blue, purple, orange, yellow, green, black, and even blank. The rarest garnet is the blue garnet and it was originally found only in Madagascar up until the 1990’s. Since then it has been located in the US, Kenya, Russia and Turkey.

The garnet isn’t just popular as a birthstone present!

Garnet is the birthstone for January however, with its staggering assortment of hues and it’s believed metaphysical powers, it has been given as a present for many different occasions for a very long time! Red has long since been considered the color of love. It’s very common to see engagement rings with diamonds and garnets paired together as the symbol of a lasting love. The garnet is also a popular gemstone for anniversary jewelry as well. The possibilities for this beautiful stone are endless!